Hachiko, the akitas behind the scenes 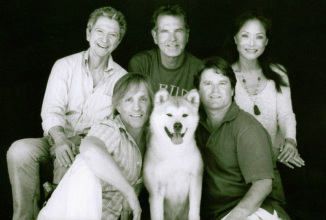 Some people believe that there was only one dog in the film, I am sorry to disappoint you guys, Vicki Shigekuni Wong, the movie producer blogged about the dogs and their trainers.

Boone's Animals For Hollywood has been training animals all over the world for over thirty years. Boone Narr's reputation with producers and animal groups is sterling, and his uncanny ability to connect with dogs is amazing to watch! I observed how Boone placed his concern for the dog's well being over everything else, and he worked closely with the American Humane Association to this end.

Several dogs were needed to portray Hachi over the ten year period. Based on our criteria, Boone found three adult Akitas named Forrest, Leyla and Chico to play the part of the adult Hachi. They were show dogs from all around the country, and blood-related. We needed multiple adults due to the long working hours, and for scenes that required specific personalities. Leyla was called the ‘kissing dog’ due to her affectionate nature. Forrest was reserved and we used him in more serious scenes.

People have asked me why we chose an Akita to play Hachi. They are known to be very independent thinking, and even our animal trainers had never worked with the breed before. We felt that as the original Hachiko was a Japanese Akita - to honor him and his story, we had to stay true to his lineage. There was never any question of the dog being anything but an Akita.

Our puppies grew very quickly, so we were constantly replacing them over the several month long shoot. Due to this size issue, we decided to use the smaller Shiba puppies instead of Akitas. Lasse was amazed at their ability to take instruction. Having all the dogs and puppies on the set fostered an unusually easy and warm atmosphere.

Richard recounts his first meeting with the dogs. “It was nerve-wracking because they are very independent and they either like you or they don’t, and we couldn’t find Akitas that were trained animals. About four weeks before shooting the trainer said, ’It’s time for you to meet the dogs’. It was a decisive moment, because if we didn’t get along, we had to find three other adult dogs and start from scratch again."

“I actually met the dogs at the train station in the movie and the trainer said, ’Don’t look at the dogs, just ignore them’. The next day I could look at them. The third day, I was sitting talking to the trainers and Layla came over and put her head right on my lap. And from that moment on I was part of the family.”

“We created situations that would allow them to behave in any way they wanted to behave. And sometimes we would go through a day and have quite a few magic moments which would just evolve. And then we’d have times when nothing would happen, they didn’t feel like it, so we definitely were at their mercy in making this film. We knew it was going to be about the dogs, it definitely wasn’t about me."

CNN - On the set of "Hachiko" with Richard Gere