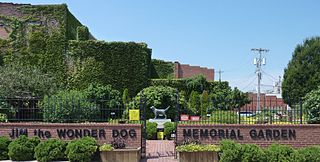 Since the akita gained lots of fame with the movie Hachiko we feel that we should also be aware of other wonderful dogs that made history. One of these dogs was Jim.

Jim was a Llewellyn setter born of pureblood champion field stock in Louisiana. Though his litter mates were selling for $25 each, a goodly sum in 1925, he was considered the most unlikely of the litter and came into Sam VanArsdale's hands for less than half that amount. Attempts to train Jim for the field seemed futile as he lay in the shade watching while the trainer worked with the three other dogs.

However, when taken to the field that fall for the first time, he immediately went to a covey of quail, came up on perfect point, held steady until the quail was shot, and immediately brought the bird to Mr. VanArsdale on the order to "fetch". He proved to be a marvelous hunting dog, knowing where there were quail, and refusing to hunt where there were none. His master, an avid hunter who traveled from state to state hunting, kept track of birds shot over his beloved dog. He stopped counting at 5,000, a total no other dog ever reached. Outdoor Life Magazine termed him "The Hunting Dog of the Country".

However, Jim was much more than just a champion hunting dog since Mr. VanArsdale found, quite by accident while in the field one day, that his dog could understand what he was saying to him 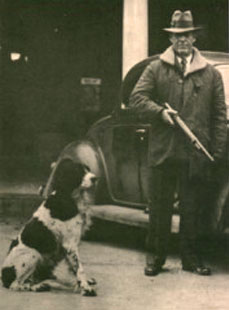 and carried out his commands. It was a hot day, and Mr. VanArsdale said, "Let's go over and rest a bit under that Hickory tree". Although in a woods of numerous kinds of trees, he went to the Hickory. Surprised by this, he asked Jim to go to a Walnut, then a Cedar, a stump, and a tin can, which he did rapidly and perfectly.

This was the start of the amazing things the dog did on command. When told to do so, he could go out on the street and locate a car by make, color, out-of-state, or a license number. From a crowd he could select the "man who sells hardware", and the one who "takes care of sick people", or the "visitor from Kansas City".

He carried out instructions given to him in any foreign language, shorthand, or Morse Code. He was capable of predicting the outcome of future events. He chose the winner of seven Kentucky Derbies, The World Series of baseball and the sex of unborn babies.

Mr. VanArsdale arranged for a demonstration at the University of Missouri with Dr. Durant, head veterinarian. He could find nothing physically abnormal from any other dog. He was tested by a group of college students and passed each command with flying colors.

In 1935 Jim performed at the Kemmerer Hotel in Kemmerer, Wyoming. After his successful perfomance, an article was written in the Gazette of Kemmerer on Friday, August 30, 1935, telling of this performance and referring to Jim as "The Wonder Dog".

Jim also performed before the Missouri Legislature and at the Missouri State Fair in Sedalia. Newspaper and magazine writers came to witness Jim and were stunned. They wrote of incredulous things they saw and Jim's fame spread across the United States and elsewhere. He was featured in Ripley's Believe It or Not.

He is buried in Marshall's Ridge Park Cemetery with a grave stone and is probably the only animal in a people cemetery. Caretakers say his is the most visited grave there and is seldom without flowers and coins left on it. The site of the Jim The Wonder Dog Garden off the northwest corner of the Square is the place once occupied by the Ruff Hotel where Jim lived with his owner Sam VanArsdale, the hotel manager. This is Marshall's way of commemorating one of it's most famous "citizens".