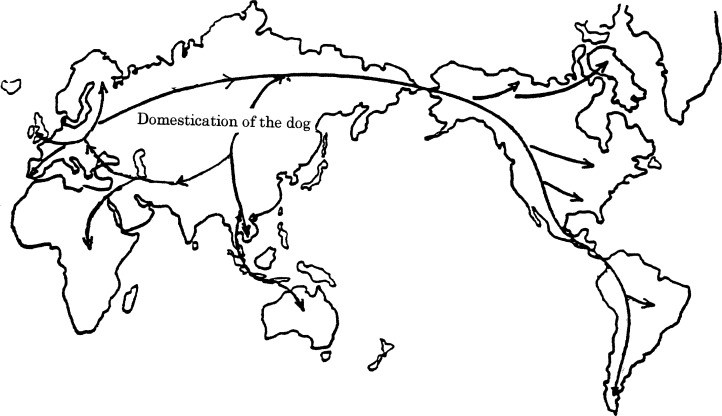 Dogs were domesticated in East Asia from East Asian wolves (Canis lupus chanco) more than 15,000 years ago. That date is estimated from the rate of molecular substitution of mitochondrial DNA and the age of ancient dog remains. Domesticated dogs accompanying people migrated and dispersed throughout the entire world.

Dogs have always migrated with people. The earliest-known migrants to Japan, the Jomon people, are thought to have brought dogs to the Japanese archipelago some ten to twelve thousand years ago. The oldest dog skeletal remains discovered in Japan date from 9,500 before present (B.P.).

The Jomon people, who lived by hunting and gathering, eventually settled in regions all over Japan, but mainly on Honshu, with dogs as their companions. The Jomon civilization lasted nearly ten thousand years, from 12,000 to 2,300 before present (B.P.) and through this period dogs seem to have been the sole domesticated animals. When their dogs died, their owners buried them.This situation of the Jomon people was similar to that of North America Amerindians at the time of the Spanish and Portuguese conquest.

The early Japanese dog was small, roughly the same size as the present-day Shiba. Furthermore, the skulls are distinguished by a long muzzle and a shallow stop (the depression in area between the eyes that connects nose and forehead) or no stop at all. It is generally believed that these early dogs of the Jomon period are the ancestor of the six Japanese breeds found today, and that the prototype of the Japanese breeds was already established in the Jomon period, which was followed by the Yayoi period, marked by fresh wave migrants (now known as the Yayoi people) to Japan from the Korean Peninsula. The Yayoi period lasted for six hundred years. Skeletal remains of dogs from the Yayoi period, unearthed in the Kuwanae burial mounds in Oita Prefecture and the Yoshinogari burial mounds in Saga Prefecture, both of which are dated roughly to two thousand years ago, show distinct differences from the Jomon period dogs. Their skulls have a prominent stop, and their frames are slightly larger than the earier type of dog. Such evidence suggests that in the Yayoi period a new type of dog came to Japan, along with the new wave of people from the continent. The care and devotion accorded to the burial of dogs in Jomon is no longer evident in sites dating from the Yayoi period (2300–1700 B.P.). Most dog skeletons are partial and the bone are scattered; the remains show cuts and seem to have had the flesh torn off. This suggests that in the Yayoi period dogs were eaten as food, and this habit would have been unthinkable among the Jomon.

In the years following Japan’s opening to the West in 1868, ideas about animal welfare took hold, and any lingering practices of eating dog meat disappeared almost entirely. During the late nineteenth and early twentieth centuries, all sorts of dogs were imported, particularly from Europe. In urban regions, crossbreeding between Japanese and foreign breeds proceeded rapidly, whereas in rural areas from Hokkaido to Kyushu, Japanese indigenous breeds, mainly used by hunters, were protected as local dogs and their genetic integrity preserved. In the latter half of the 1920s, amid growing national interest and pride in things Japanese, the movement to preserve Japanese dog breeds flourished. The Ministry of Education gave several Japanese dog breeds official recognition as “Natural monuments” (Protected Species): the Akita received this designation in 1931, the Kishu and Kai in 1934, the Shiba in 1936, and the Shikoku and Hokkaido in 1937. Preservation associations were established for each breed, and breed standardizations were formulated.

After the Second World War, thanks to the strenuous and unceasing efforts of conservation societies to restore, maintain, and preserve native breeds, Japanese dogs survived and began to flourish. One consolation in these difficult years was the fact that the indigenous breeds preserved as hunting dogs by hunters in the remote mountainous regions of Japan could be used to restore the breeds nation wide.

Apart from the six breeds above, several others should be mentioned here. One is the Chin, which was developed in Japan during the Edo period. The Chin was in fact brought to Japan from China many centuries before, and is altogether different in its morphology from other Japanese dogs, so its development does not seem to have involved any exchange of genes with indigenous Japanese dogs. There is also the Ryukyu dog, named for the subtropical island chain that arcs southwest from Kyushu. The Ryukyu dog is a breed of indigenous Japanese dog found in the Yanbaru region in the north of Okinawa Island and Ishigaki Island that followed its own separate course of development.

There are also the Mikawa dog of Tokushima Prefecture, and Satsuma dog of Kagoshima Prefecture, the latter of which has almost extinct. Both of these breeds have their own preservation movements, set up through the efforts of dog fancires and enthusiasts.