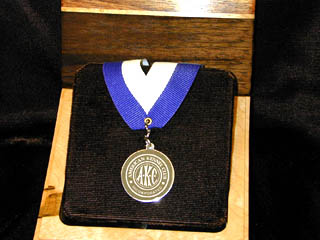 Chilie the hero Akita, an eight year old female Akita who saved the lives of two children and two adults in her family from a deadly fire in New York City, has won the American Kennel Club Award for Canine Excellence in the category of Exemplary Companion Dog. The families pet Chihuahua and cat died in the blazing inferno. Chilie is an example of what the Akita breed of dog is capable of, loving and taking care of its family.

One dark day in the City of New York when her family was sound asleep, Chilie the Akita twitched her nose. She awoke with a start. Something was wrong in the apartment. She sniffed and confirmed, something was burning. Fire! Chilie began to bark,

as loud as she could, to awaken her family. She raced over and began to scratch at the adults closed door. She ran into the children's room, pulled the covers off their beds and began to nudge them with her paw to wake up and flee. Fire! The children awoke and began to scream, the adults awoke, ran to the apartment front door, opened the security locks and fled into the street to safety. Chilie was at their heels telling them to run, run. Fire!

Miriam Rodriquez, awoke her husband, Ignacio Vasquitelles, and their two sleeping children, Ivy and Ian, then three and four years old and led them out of the building to safety just seconds before a fire explosion rocked the apartment. The family's pet Chihuahua and cat died in the blazing inferno. The family's apartment was totally destroyed by the fire, unsalvageable. The family found shelter at the Fernandez Family Residence in the Bronx.

Ms. Rodriquez said the devastating blaze erupted in the kitchen of their second-floor apartment at 2832 University Avenue in The Bronx, New York City shortly after 9 a.m. on March 12, 1996. "I had just gone back to sleep after getting my two older sons off to school when I heard Chilie scratching and barking up a storm outside my bedroom door, "said Ms. Rodriguez. "I jumped out of bed, opened the door and saw flames racing through the kitchen." Ms. Rodriguez, who worked as a building superintendent before the fire, spent the next month in a hospital undergoing treatment for burns on her arms, back and feet.

Chilie the hero Akita had saved her family. The Mayor of the City of New York awarded her a special life saver medal and an official commendation, he shook hands with the family and posed for photographs with Chilie and the children whose lives she had saved. The local newspapers touted her courage, integrity and advised everyone to get one of these life-saving fire alarm Akita dogs.

However, the heartless officials at the Fernandez Family Residence, a city-owned, privately run long-term people shelter in the South Bronx, ordered Ignacio Vasquitelles and his wife, Miriam Rodriguez, to give up their dog Chilie or risk joining her on the street. Shelter officials, with the support of the New York City Department of Housing Preservation and Development, filed a civil lawsuit in court to force the family to get rid of their friendly Akita, or face eviction. But the couple and their four children were not going to part with their beloved pet without a fight. "She saved our lives, and there is no way we are going to let them take her away," said Ms. Rodriguez, wiping away tears as she stood outside the rundown, long-term shelter on Fox Avenue, in The Bronx, New York.

"They'll have to go over my dead body to take away the dog. If it weren't for the dog, me, my husband and two of my children would have certainly died in the fire." The family's volunteer lawyer, Karen Copeland, Esq. of New York whose specialty is the city's pet law, contended in court that Mr. Vasquitelles was entitled to keep Chilie in the family's shelter apartment because of his disability, under both the federal Fair Housing Act and the city Civil Rights Act. Ms. Rodriguez insisted that the family's fight to keep Chilie wasn't a frivolous one, explaining that her husband has been sick and the dog has helped keep up his spirits. Mr. Vasquitelles, a former security supervisor, had suffered a stroke and has also been diagnosed with diabetes.

The court ruled for Chilie and her family. However later on the family faced a draconian Choice. There was not enough money for food for four young children and an ill husband and their loyal dog. With tears streaming down their faces the family bowed their heads and sadly gave Chilie up to the New York City CACC animal unit. Chilie was despondent, dejected, stuffed into a small cage with a hand written note outside proclaiming her "last day" to the world. One of the CACC shelter employees recognized Chilie's name, she remembered reading the newspaper stories and seeing the Mayor of the City of New York award Chilie a medal on TV. Surely there must be a mistake, an error. No, replied the tearful family, Chilie was the hero Akita that had saved her family, the same family that had brought her to the animal shelter pursuant to a court order. Chilie's days were numbered. The nice shelter employee lady sent out emails to every Akita Rescue group, every Akita breeder, that she could find with an email address, telling of Chilie's plight. Each day the broken hearted family telephoned the CACC animal shelter to ask how Chilie was and if she had been saved by an adoption.

Fortunately, Nancy Lamm, Director of Akita Rescue of Western New York (ARWNY) and Kathy DeWees, ARWNY Vice President, were alerted to Chilie's plight. Their hearts sank when the CACC emailed them and described the once distinguished Akita as depressed and dejected in her new unfamiliar surroundings. ARWNY did not have kennel space available, their fostering volunteer homes were full up, the treasury was an empty joke and a hero Akita was scheduled to be "put down". Shocked and touched by Chilie's story, the two ARWNY officials rallied a handful of Akita Rescue volunteers who selflessly brought Chilie to safety. The ARWNY volunteers dug into their own pockets for money, they made telephone calls and sent emails seeking a foster home, a spare crate, some little space to house the hero Akita Chilie. They were successful. ARWNY came through for Chilie.

Chilie was transported across three state lines and placed in a foster home with ARWNY coordinator, Debby Parcel in Pennsylvania. The ARWNY volunteers publicized the heroic Akitas situation and patiently awaited the stoic eight year old Akita's adoption, but they were concerned for Chilie's future. Her age did not make her a prime adoption candidate.

Ms. Kathy DeWees, a long time Akita Rescue volunteer and also president of the Akita Angel Fund said: "Many many thanks to everyone who helped save this girl: Larry Kaplan who transported her, Nancy Allman for helping with transport; Nancy Lamm and Lynny Benzinger who brought her down to me in New Jersey; Jeff Clement who boarded her for free to help us find her the best home; all of you on here who offered donations, tried to help her find a home and sent us prayers and good wishes; and most of all, to Hogan Sung who flew out from San Francisco to adopt this old gal, who then spent thousands on her surgery when she bloated and who loves her beyond belief."

Mr. Hogan Sung, a California native, was surfing the Internet trying to build a memorial web page for his deceased Bulldog, coincidentally named Chilie. After typing in the name Chilie into a search engine, he found ARWNY's web page on Chilie the Akita. Hogan read Chilie's story and was adamant that she be part of his family. He flew 3,000 miles to see her and bring her back home to California with him. Hogan and Chilie were brought together but their newfound friendship would be tested. Most likely because of the stress of losing her only family, a little while after Hogan adopted her, Chilie bloated.

Because of her age, the odds were against her, but with the indomitable Akita spirit that her ancestors displayed in the mountains of Japan, she pulled through. Hogan selflessly spent everything he had to cover his new companion's surgery. Today Chilie happily resides in sunny California with her devoted owner Hogan, his wife Hannika and another newly adopted Akita rescue dog named Slash.

Mr. Hogan Sung said: "There were many great people involved with saving this angel Akita especially Nancy Lamm, Debby Parcel and Kathy DeWees of Akita Rescue of Western New York. I understand there were several other great people involved as well whom boarded, fostered, and transported her to a safe situation. I thank all involved and thank God everyday for allowing me to be Chilie's guardian."

Each year the American Kennel Club (AKC) presents Awards for Canine Excellence (ACE). To qualify, the dog nominees must be purebred , AKC registerable and have performed some exemplary act, that has significantly benefited a community or individual.

One award will be given in each of the five categories: exemplary companion dog, law enforcement, search and rescue, therapy and service. Each of the five canine honorees and their proud owners will receive a cash award of $1,000.00 and an engraved sterling silver AKC collar medallion. In addition, the engraved names of the five recipients will be added to the ACE Awards plaque that is on permanent display in the AKC Library in New York City. All nominees will also receive an AKC ACE Certificate of Recognition in acknowledgement of their nomination. The Akita world offers its congratulations to Chilie on winning the American Kennel Club Award for Canine Excellence.

Being nominated for the American Kennel Club Award for Canine Excellence is an action to express the Akita Rescue communities time-honored respect for the extraordinary canine-human bond. Chilie being nominated, selected, making two final selection cuts and then unbelievably winning the AKC ACE is an example of what the Akita breed of dog is capable of loving and taking care of its family.

On October 17, 2001 the assistant secretary of the AKC, Mr. Ron Rella, made a special presentation of the ACE medallion and certificate to Chilie and her forever owner Mr. Hogan Sung at the ACA national specialty show in St. Louis, MO. Akita owners and canine admirers from around the world attended and took photos of Chilie the hero Akita.